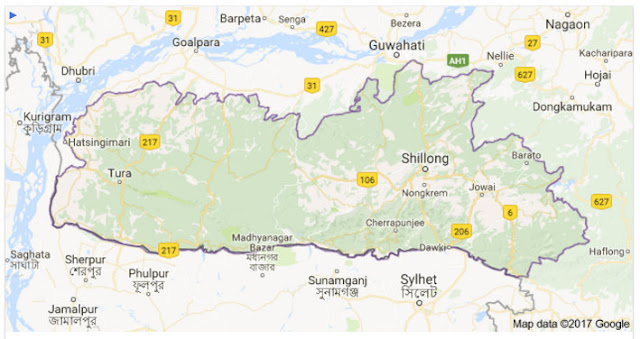 How to experience the best of Manipur, Assam,
and Meghalaya in 2 weeks and a bit (Part III)

Cowering behind our car, I found myself at my wits' end. How was I to get back in?

Just two minutes previously, I had asked the driver to pull over so I could step out and take some pictures. It was not an unusual request because at almost every turn during our road trips in alluring Meghalaya, we would stop, and drink in the divine landscape in front of us, our phone-cameras working away like mad.

The omens had not been good, though, when we drove down from Guwahati to Shillong on March 30. It had rained almost throughout the three-hour journey and the resultant fog had rendered invisible the sights along the way. Umiam Lake, for example, which our driver, Deepak Bahu, referred to as "Bara Pani", was completely obscured. We would have to stop during the return journey on April 4 to be able to admire the breathtaking views we had read about, provided the sun was out, of cours…
Post a Comment
Read more
April 24, 2017

How to experience the best of Manipur, Assam,
and Meghalaya in 2 weeks and a bit (Part II)

"Kaziranga sure is blessing you. Spotting rhinos is only for the lucky ones."

Wangdi Dorjee Khrimey was overjoyed. His clients had tasted success at the national park that is not only a Unesco-recognised world heritage site but also one that is referred to by Sanctuary Asia as "probably one of the richest, most picturesque wildlife habitats of southern Asia".

Wangdi, who lives in Arunachal Pradesh, and his Bangalore-based partner, Hemant Soreng, who runs Rustik Travel, had, in addition to making our hotel bookings and arranging a car and driver, helped us to finalise our itinerary for the Assam-Meghalaya leg of our Northeast holiday.

Hemant had also created a WhatsApp group just for this trip. Both he and Wangdi would check in at regular intervals to make sure that everything was going smoothly for us. When internet access became a problem, we resorted to sending each other t…
1 comment
Read more
More posts